But what is the Secular Franciscan Order?

At the time of St. Francis of Assisi

One day, as Francis is preaching near Assisi, all those who listen to him are enthralled by his impassioned preaching. They want to leave everything behind to follow him. But Francis of Assisi seeing the commitments they have in this world (such as family responsibility), refuses to let them follow him in the same way as those do who commit themselves to the Friars Minor Order. He then has the idea of establishing the Order of Penance (nowadays called Secular Franciscan Order). Those who can join this Order are clerics, laity, unmarried and married people.

What is the Secular Franciscan Order?

The Secular Franciscan Order is an order which consists of people who, without leaving the world nor taking any vow, pledge to work towards Christian perfection according to the evangelical spirit of St. Francis of Assisi, through the accomplishment of their duty and by observing a rule approved for them by the Sovereign Pontiff. 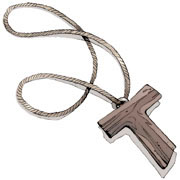 The Rule, program for an Evangelical life

As a guideline, St. Francis' secular brothers and sisters have the rule Pope Paul VI confirmed on June 24th 1978. This rule succeeds the 'Memoriale Propositi' written in 1221 by St. Francis which laid the foundations of the Secular Fraternity, and also rules approved by the Supreme Pontiffs Nicholas IV and Leo XIII. The Rule and life of the Secular Franciscans is this: TO OBSERVE THE GOSPEL of our Lord Jesus Christ by following the example of Saint Francis of Assisi...(art. 4 of the Rule).

Made by www.pbdi.fr Illustration by Laurent Bidot Translation : Cindy Garitan